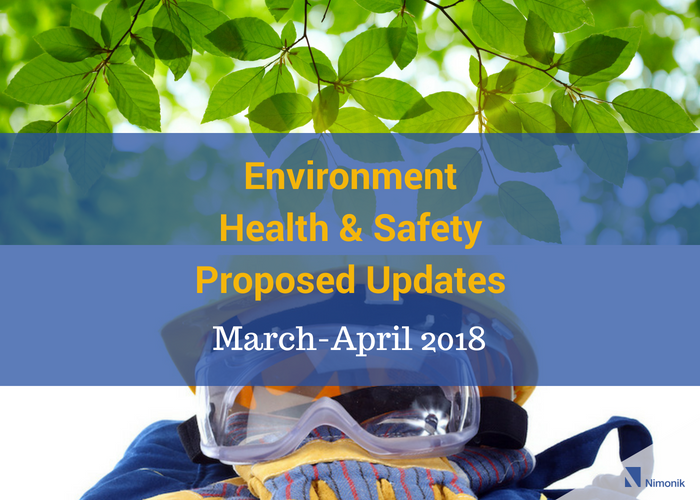 Below are the EHS updates for North America for March April 2018. To know the detailed analysis, please contact us.

The Environmental Protection Agency (EPA) has extended for an additional thirty days the comment period for user fees that would apply to manufacturers, importers, processors, and distributors of certain chemical substances under the Toxic Substances Control Act. Learn More

The Environmental Protection Agency, among other federal departments and agencies, recently revised the Federal Policy for the Protection of Human Subjects. They are now proposing to delay the implementation date of these amendments to January 21, 2019. Learn More

The Pipeline and Hazardous Materials Safety Administration is requesting information and comments on factors that should be considered in regulatory development to ensure the continued safe transportation of hazardous materials without impeding on the development and potential use of automated technologies for surface transportation (i.e., highway and rail). Learn More

The Government of Canada has proposed a legislative framework that would apply charges to fossil fuels such as gasoline, fuel oil, propane, coal, and natural gas.

According to Norton Rose Fulbright, this framework would notably

Government authority to designate marine protected areas (MPAs) and control the activities that occur there could soon grow.

According to the Government of Canada, these changes, which would amend the Oceans Act and the Canada Petroleum Resources Act, would notably

As part of the initiative to reduce Canada’s greenhouse gas (GHG) emissions, improved energy efficiency standards have been proposed for appliances and equipment.

According to the Canada Gazette, the proposed changes will

The Alberta Energy Regulator (AER) is asking for public input on proposed requirements for reducing methane emissions from upstream oil and gas operations.

According to the AER, the requirements “address the primary sources of methane emissions from Alberta’s upstream oil and gas industry: fugitive emissions and venting, which includes emissions from compressors, pneumatic devices, and glycol dehydrators”. The Alberta Government notes that “[t]he draft directives include new and enhanced requirements for measuring and reporting methane leaks Learn More

Updates proposed to safety rules for lifejackets and electronic detonators

Stakeholders are being invited to comment on proposed updates and new requirements related to blasting operations and working in or near water.

In particular, comments are being sought on

The Government of Manitoba has proposed stringent provisions related to the protection of lakes and waterways.

According to the Government of Manitoba, these changes, which would amend The Conservation Districts Act, the Water Protection Act, and The Water Rights Act include

The Government of Manitoba has proposed changes regarding the management of roadways.

Proposed cannabis rules include restrictions on use in public places

To prepare for the federal legalization of cannabis, the Government of Manitoba has proposed changes related to smoking laws.

Notably, the proposed changes would prohibit the smoking and vaping of cannabis in outdoor public places such as “streets and sidewalks; parks and beaches; school grounds; restaurant patios and decks; (and) the grounds of health-care facilities” (Manitoba Government). Learn More

Proposed cannabis rules include restrictions on use and transportation

As a consequence of federal laws for legalization of cannabis, territorial rules may soon be introduced that would implicate public smoking and impaired driving, as well as possession, sale, and distribution of recreational cannabis.

Notably, the proposed rules would

The Government of the Northwest Territories is requesting input on proposed amendments to the territory’s legislative framework for oil and gas exploration, production, and management.

According to the government, the amendments “fall under three distinct categories:

New driving and smoking rules proposed regarding cannabis use

As part of an initiative to establish a provincial framework for the federal legalization of cannabis, changes are coming to various laws, including the ones pertaining to driving and smoking.

Notably, the changes would set prohibitions and restrictions on the use of cannabis in public places and on the transport of cannabis in motor vehicles. Learn More

Proposed cannabis rules include restrictions on use and transportation

As a consequence of federal laws for legalization of cannabis, provincial rules may soon be introduced that would implicate public smoking and impaired driving, as well as possession, sale, cultivation, and distribution of recreational cannabis.

Notably, the proposed rules would

The Commission des normes, de l’équité, de la santé et de la sécurité du travail is seeking comments on proposed changes to requirements on protection and prevention against falls. In particular, the changes, would “provide new rules and updated standards … in relation to the layout of the premises and the use of individual and collective protection measures and equipment” (Gazette Officielle du Québec). Learn More

Changes are being proposed to the province occupational health and human resources rules.

Notably, the changes, which would be put in place by amending the An Act respecting labour standards

Owners, users, sellers, and maintainers of equipment that produce ionizing radiation (such as x-ray machines and CT scanners) should be aware that the Government of Newfoundland and Labrador is seeking comments on proposed changes to provisions related to the inspection, installation, use, maintenance and registration of such equipment. Learn More